Back to the blog

For years, the mobile fueling industry has sat largely unnoticed by the consumer. Until recently, it has mostly been made up of a small handful of regional fuel wholesalers who provided “fleet fueling” for mid to large size fixed diesel and gas powered business fleets. The customers were primarily those who recognized the enormous labor cost associated with hourly employees refueling their own company vehicles at local gas stations.

With the proliferation of the app and gig economy, along with technology advancements in vehicle manufacturing and mobility, it’s only natural that a handful of entrepreneurs and startups decided to take mobile fueling where it had previously never gone before, directly to the consumer.

Until recently, the economics of bringing fuel directly to consumers didn’t make sense. Now that we have reached a technology tipping point, there is a new economic case to be made. At scale and with the right pricing models, small fleet, distributed/decentralized fleet, and direct to consumer mobile fueling can be a long term legitimate business model. Not to mention the changing marketplace and significant rise in consumer demand.

Quickly, mobile fueling is becoming one of the latest ideas to attract a large amount of attention out of Silicon Valley. Along with this comes a rise in safety concerns by regulators, as well as marketplace disruption concerns from traditional fuel retailers and the associations that represent them. As expected, those being disrupted tend to leverage the regulatory concerns to protect their own marketplace dominance at the expense of the consumer.

With history as a guide, the response we are seeing today is strikingly similar to the response we saw from traditional fuel retailers when the first gas stations began transitioning from full service to self service in the late 1940’s. A few innovative retailers responded to customer demand for self serve filling stations, only to have full service retailers quickly co-opt regulatory and safety concerns about the perceived dangers of untrained customers pumping their own fuel. This was largely a self serving defense of their positions in the marketplace. We have come full circle! 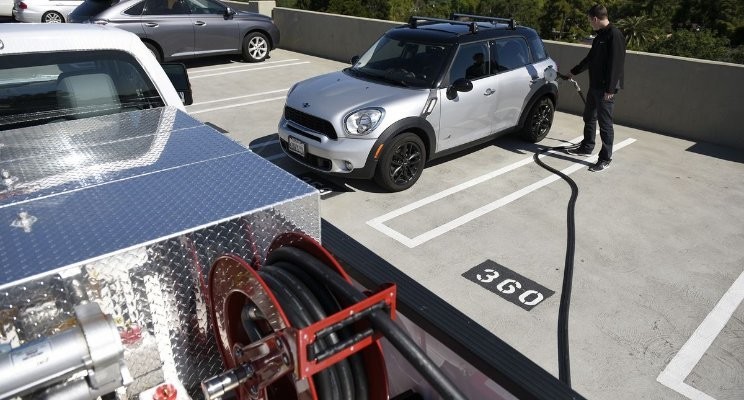 No doubt, mobile fueling certainly has its own set of safety concerns to address. The regulatory community plays an important role in ensuring that the new players in the direct to consumer, app enabled mobile fueling space operate in a manner that is safe for the consumer, the employee, and the environment. I am confident that we are all aligned on these goals. The challenge often lies in aligning on the strategies to achieve these goals.

There is a very clear need for all stakeholders to have visibility into and accurate information about the diverse nature of the quickly growing mobile fuel industry. For example, distinctions between truck type, aggregate fuel capacity, driver training and certification, dispensing locations, and time of day all give rise to meaningful differences in hazard/risk profiles. This also presents very different value propositions for customers using mobile fueling services.

All of this should be carefully considered and evaluated. This will require, at least in part, that this nascent industry is allowed to demonstrate the many opportunities to provide value to customers while simultaneously upholding the highest standards for safety and the environment. I am confident the bright minds in the mobile fueling industry, in partnership with the regulatory community, will make the necessary safety advancements to ensure mobile fueling is a safe and lasting business model.

I am excited to see where the industry goes from here. The wildcard will be what kind of influence the traditional retailers and the associations that represent them will have on the regulatory process. Regulatory and safety concerns can often get sidetracked by the agendas of those being disrupted. As long as the regulatory communities maintain their commitments to protecting the consumer and environment, we should all be able to come together to make sure mobile fueling is as safe as possible, to the delight of the mobile fueling customer.

This week, we had the exciting honor of participating in the 2019 Vancouver International Auto Show! The annual six-day event showcased a wide range of…

Welcome to Filld’s next phase: From our CEO Michael Buhr

For over three years, our team has worked tirelessly toward Filld’s vision of liberating drivers from the growing stress and challenge of getting gas for…